Conservative groups are calling on Minnesota seniors to boycott the American Association of Retired Persons over the group’s opposition to the photo identification measure on the November ballot.

To drive their point home, seniors gathered at a Wednesday press conference snipped AARP cards into shreds. They say there are conservative-affiliated groups that can give them the same senior discounts and that share their conviction that requiring a photo ID to vote will reduce voter fraud.

“I’m somewhat disappointed that my dues with AARP might be used against me,” said Joe Remley of White Bear Lake (valued member of AARP since 1996) before he sliced up his card with a pair of scissors. Remley said he has to show a photo identification for almost everything else in life – from a doctor’s visit for his injured hand to a trip to the Ramsey County compost site. “Ramsey county considers the compost heap more sacred than they do the voter booth.”

The protest didn’t faze the AARP of Minnesota, which has seen similar card-shredding protests over its support for the Affordable Care Act and its opposition to privatizing Social Security.

AARP state director Michele Kimball said the group has 670,000 members in Minnesota, and it’s impossible to take policy positions that every single member will back every single time. 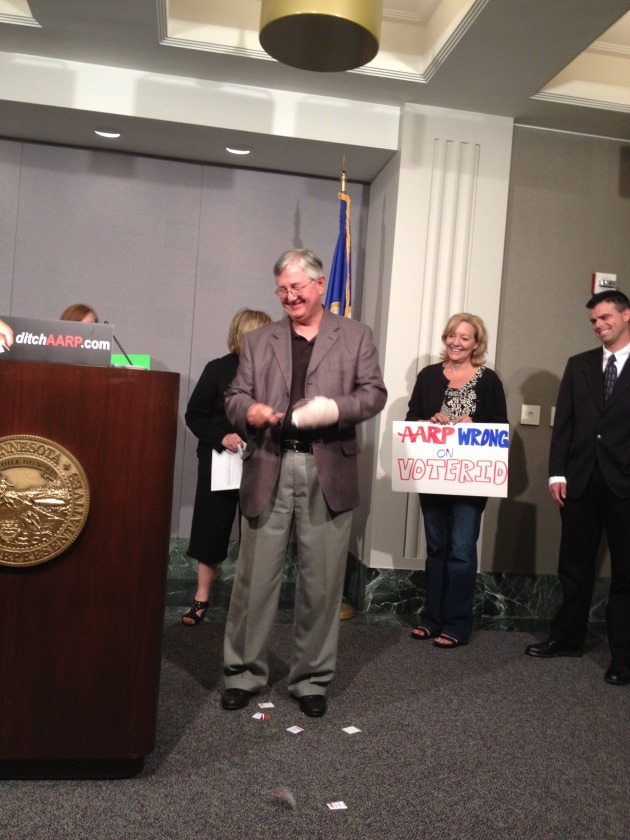 “We are staying the course,” said Kimball, whose group has registered with the state to campaign against the November ballot amendment. “This is about concers we have about the unintended consequences (that the amendment could have on) the ability of seniors and the disabled to vote.

Kimball estimates that as many as 64,000 Minnesota seniors could have trouble obtaining the type of photo identification they would need to vote.

But Jeff Davis, president of the Minnesota Majority, disputes the idea that the new ballot amendment would disenfranchise the elderly – even frail nursing home residents who no longer drive. He leads a statewide conservative coalition that is launching the new website ditchAARP.com to encourage seniors to boycott AARP.

“Polls have consistently shown that senior citizens support voter ID,” Davis said. “We think it’s wrong for a membership-based organization to take a position on an issue that’s diametrically opposed to a supermajority of its members….We think most members are simply unaware of the positions they’re taking on some of these issues.”

The website includes a list of conservative  organizations that offer the same sort of senior discount cards that AARP members receive.

“They deceived the elderly and they’re dishonest and they’re dishonorable,” said Jack Rogers of the North Metro Tea Party, who said he held on to his expired AARP card just so he could destroy it in protest. “Go away from these people. Don’t be with them.”

AARP’s Kimball said her group is nonpartisan, and nonpolitical and will push ahead with its public information campaign in the months leading up to the November campaign. The group would prefer to see the constitutional amendment defeated so both parties could come together and work on a bipartisan solution to prevent voter fraud without disenfranchising anyone, she said.