Retired Horace Mann Teacher Admits to Homosex With Students (Thinks It Was OK!)

Tek Young Lin was revered at the Horace Mann School. He was different from other teachers — a Buddhist who carefully tended to his elaborate gardens, a chaplain and a cross-country coach. He was so beloved that the English department chairmanship was named in his honor. 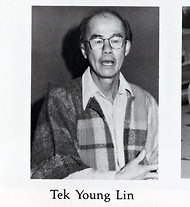 Mr. Lin, in a 1984 yearbook, is a former English teacher at the Horace Mann School who said he had sex with “maybe three” of his students.

Since the publication of a New York Times Magazine article about sexual abuse at the school, accusations against former teachers who are still alive have surfaced online.

But there was something else about Mr. Lin: a focus he placed on certain students, a fascination that some said looked like infatuation.

Last week, in an interview, Mr. Lin, now 88, acknowledged that there was something to those whispers. He said he had had sex with students, “maybe three, I don’t know,” crossing boundaries he said were not so clear years ago.

“In those days, it was very spontaneous and casual, and it did not seem really wrong,” he said.

A New York Times Magazine article this month that exposed sexual abuse at Horace Mann, a preparatory school in the Bronx, has spurred thousands of alumni to express their feelings online and a number of victims to reach out to one another. Two law enforcement agencies have opened Horace Mann abuse hot lines. The school has pledged to “work together to understand what may have happened and why,” and last week, after accusations against Mr. Lin began to surface in online postings, Horace Mann removed his name from the English department chairmanship.

The teachers named in the magazine article, which recounted abuse that occurred 20 or more years ago, are all dead. But since its publication, some graduates of the school have made accusations against former teachers who are still alive, including Mr. Lin.

Because of New York’s statutes of limitations, it is unlikely that Mr. Lin could be prosecuted or sued for any actions that occurred when he was at Horace Mann; he retired voluntarily in 1986.

The Times has interviewed three former students who described inappropriate contact by Mr. Lin. One said he refused Mr. Lin’s request for sex; another said there had been physical contact, but no sex. One, who said he was 14 or 15 when the inappropriate contact began, said that Mr. Lin had sexual contact with him several times over several months, and that they had had a relationship that lasted years.

Mr. Lin, who lives near Santa Cruz, Calif., said no coercion had been used. “The only thing I can assure you of was that everything I did was in warmth and affection and not a power play,” he said. “I may have crossed societal boundaries. If I did, I am sorry.”

Thomas M. Kelly, the head of school, declined to comment directly on Mr. Lin’s statements, but a spokesman for the school’s public relations firm said: “If what Mr. Lin has told The New York Times is true, the conduct in which he says he engaged was appalling. We urge him to cooperate with law enforcement authorities.” Mr. Lin said no authorities had contacted him.

In the phone interview, which lasted about a half-hour, he cited his fading memory and his advanced age. He recalled facts like the names of four of his five headmasters and provided details about one particular encounter, most of which were confirmed by the student involved.

Mr. Lin was articulate in the interview, sometimes philosophical and a bit puzzled by the resurfacing of the past. “I’m surprised they remember,” he said, referring to the students. “It was all so casual and warm.”

The era had not yet come when a teacher would be viewed automatically with suspicion for inviting a student to his home. Sexual scandals in institutions like the Roman Catholic Church and Pennsylvania State University were still decades away. Mr. Lin himself said he had acted “occasionally out of impulse,” adding, “In those days, the ’60s and ’70s, things were different.”

All three students cited Mr. Lin as a positive influence in their lives, even today, and seemed reluctant to speak, not wanting to hurt the reputation of a man who had opened their eyes to philosophy and literature, and whose strict grammar rules they remembered today.

Mr. Lin, whose Web site says he was born in the East Indies, came to the United States as a teenager in 1941, enlisted in the Army and served in the Office of Strategic Services, a precursor to the Central Intelligence Agency. According to Michael Lacopo, the final headmaster under which Mr. Lin served, he was working at Macy’s after the war and responded to an advertisement for Horace Mann.

Small and delicate, he was known for his passion for grammar, for the cherry trees he planted all over the Horace Mann campus, in Riverdale, and for his classroom in Tillinghast Hall, which overflowed with plants and palm trees.

“In those days, it was very spontaneous and casual, and it did not seem really wrong,” said Mr. Lin.

His Zen-like presence in a notoriously non-Zen-like environment offered students a unique outlook on the world. Long after Mr. Lin retired, some alumni started a Facebook page, “Fans of Tek Young Lin,” and many kept in touch with him.

Mr. Lacopo said he was shocked by Mr. Lin’s admissions. “He was one of the hardest-working, gentlest men, from my perspective, who was on the staff,” he said.

One of the three students expressed mixed feelings about Mr. Lin’s admission. He said Mr. Lin was right to acknowledge the relationships — but to not know it was wrong? “Delusional might not be the right word,” said the man, grappling with feelings of disappointment and anger. “But to not have the awareness that there’s a built-in power dynamic with a teacher and student?”

He said that he was 17 when Mr. Lin asked him to sleep over, and that his parents did not view it as strange.

The two slept on mats on the floor in their underwear. Mr. Lin asked to give him a massage. The teacher straddled his back and rubbed against him. The next morning, Mr. Lin caressed him. “It was like it was another person,” the man said. But nothing more happened, he said.

He said he never spoke to Mr. Lin again, and soon started to see a therapist.

None of the students who accused Mr. Lin of inappropriate contact said they had told the school, and Mr. Lin said administrators did not know. “Oh no, it was very discreet,” he said. “It seemed O.K. in those days.”

Editor’s Note: If Mr. Lin was a Catholic priest would the New York Times be so quick to tell its readers that it was “O.K.”?

Mr. Lin remembered one particular encounter with a student. “He was a violinist,” he said. “When he came to dinner, he played Schubert’s ‘Serenade,’ and we talked about that early movie ‘Four Daughters.’ ”

Mr. Lin said he did not touch that student, an account the man says is true. Mr. Lin wanted to have sex, but the student said he refused. He did not recall the movie, and said the “Serenade” he had played was Haydn’s, not Schubert’s.

“There was nothing malicious in what he was doing to me,” he said. “He probably fell in love with me and he confused sexual desire with his ability to think rationally as a teacher.” He said he felt what had happened to others was much worse.

While at Horace Mann, Mr. Lin lived in Yonkers and had pictures of former Horace Mann students hanging on his walls, said a former student, who was 14 or 15 when Mr. Lin initiated sexual contact with him. He called these boys his “pillars.”

The man said that Mr. Lin used phrases like “I just want to cuddle” and that Mr. Lin would not do anything he did not want him to do.

“Did Tek behave in a way that was inappropriate? Absolutely,” he said. “Was he warm, was it a wonderful relationship? He opened up areas of philosophy to me. Yes.”

He recalled Mr. Lin’s tears when one of his weeping cherries was trimmed. “He was a very sensitive man,” he said.

During the interview last week, Mr. Lin said he was now traveling the country to try to reunite with the nine surviving members of his World War II battalion.

He said he now understood that he might have crossed a line.

“At the time it seemed it happened and it was done, but apparently it wasn’t, and if I had in any way harmed them, hurt them, I am truly, truly sorry,” he said. “I hope if they have been hurt, they will overcome that hurt, and I should be very happy to help in any way I can.”