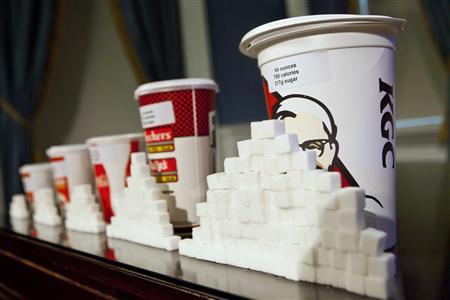 A 64-ounce drink is displayed alongside other soft drink cup sizes at a news conference at City Hall in New York, May 31, 2012.

New York City Mayor Michael Bloomberg offered a full-throated defense of his proposed ban on large-size sugary sodas on Friday, calling criticism of the proposal “ridiculous” and saying his city is again leading the way in taking on critical health issues.

“I look across this country, and people are obese, and everybody wrings their hands, and nobody’s willing to do something about it,” Bloomberg said on his weekly radio show.

On Wednesday, Bloomberg proposed a far-reaching ban on sugary sodas larger than 16 ounces (about half a liter) in most restaurants, theaters, delis and vending carts throughout the city. It could take effect as early as next March, city officials have said.

The move against soft drinks is the latest in a string of public health initiatives promoted by the mayor. During his three terms in office the city has banned smoking in bars, restaurants and public places, banned artificial trans fats in restaurant food, and required calorie counts to be posted at fast-food outlets. Bloomberg also leads a campaign to cut salt in restaurant meals and packaged foods.

The soda measure will be introduced on June 12 at a New York City Board of Health meeting. The board is expected to pass the mayor’s measure, following a three-month public comment period.

Bloomberg said that the proposal was aimed towards the city’s poorer residents who may not have a sophisticated understanding of nutrition. He insisted that the measure is not targeted towards big soda companies like PepsiCo and Coca-Cola.

“There’s nothing wrong with the products from PepsiCo and Coca-Cola,” the former-business-leader-turned-mayor said. “They are responsible companies. They are making stuff that people want to buy. This is not targeted towards those companies. This is targeted the consumer.”

Coca-Cola, the world’s largest soft-drink maker, assailed the proposal in a statement on Thursday.

“New Yorkers expect and deserve better than this,” the Coca-Cola statement said. “They can make their own choices about beverages they purchase.”

“We may be getting too close to Big Brother,” Silver told the newspaper. “I just think we ought to step back and look at the freedoms that we have been given in this country and reflect on them.”

On Friday, Bloomberg said he expected New York Governor Andrew Cuomo, a Democrat, to back his plan. Asked about Silver’s threat, Bloomberg crisply responded that “I don’t think that’s going to happen.

“I assume the governor is going to veto it.”

Bloomberg went on to compare controversy over the proposal to his 2002 ban on smoking in bars and restaurants.

“You think this was bad?” Bloomberg asked. With the smoking ban, “everybody was opposed to it. today, virtually every major city in America does it … whole countries!

“If people are yelling and screaming, there’s nothing you can do about that. I mean, this is ridiculous.”

Bloomberg, now an independent but a Republican from 2001 to 2007 and before that a Democrat, called obesity “the single biggest public health issue in the country.”

“It’s the first disease that’s gone from being a rich person’s disease to a poor person’s disease,” he continued. “Look at the pictures of the old robber barons with their big stomachs out in the ’20s. They were proud that they were fat. They all died young, but they were proud until that. Today it is poor people who are dying much more. And the numbers are just off the charts.”

“Nobody is taking away any of your rights,” Bloomberg said later in the broadcast. “This way, we’re just telling you ‘That’s a lot of soda.’”