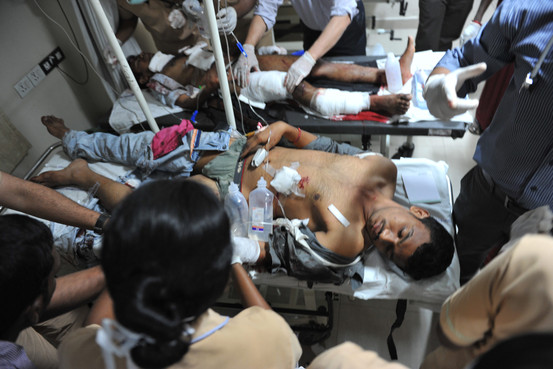 Security forces across India went on high alert Thursday after at least 12 people were killed and more than 70 people were injured in two explosions in Hyderabad city, in what state and federal officials suspect was a coordinated terror strike.

Federal Home Minister Sushil Kumar Shinde said the government had “intelligence inputs of expected blasts somewhere in the country for the past two days and had alerted all state governments.”

He didn’t offer further details or say whether there was specific information about an attack on Hyderabad, the capital of Andhra Pradesh state and home to the local units of international companies including Microsoft Corp., MSFT -1.37% International Business Machines Corp., IBM -1.75% Oracle Corp. ORCL -1.32% and Google Inc. GOOG -1.12%

Mr. Shinde said the two blasts took place within nearly 500 feet of each other, and that the bombs were placed on bicycles in a crowded market in the Dilsukhnagar neighborhood.

The death toll is likely to go up because several people sustained critical injuries.

A team of forensic experts from the National Security Guard—India’s top counterterrorism commando force—and officials from the federal investigation bureau were on their way to the blast site.

“This is a dastardly attack. The guilty will not go unpunished,” the prime minister said in a statement.

India has seen a series of terror attacks in recent years, most notably the 2008 attacks in Mumbai, the country’s financial capital, that left more than 160 people dead.

Those attacks were carried out by terrorists from the Pakistan-based Lashkar-e-Taiba organization.

This past August there were four blasts in the western city of Pune in which one person was injured.