‘I couldn’t think of anything worse than being brought up by two dads’: Gay actor Rupert Everett 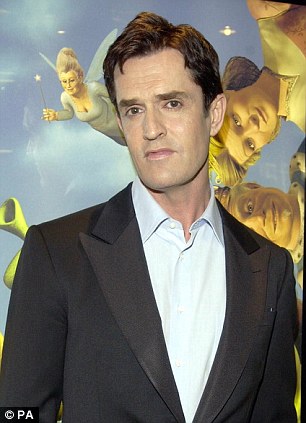 He was seen as a champion for gay actors when he decided to come out of the closet two decades ago.

The 53-year-old actor has been rounded on by gay rights groups after saying: ‘I can’t think of anything worse that being brought up by two gay dads.’

Everett’s comments are likely to offend celebrity parents such as Sir Elton John and his partner David Furnish. The couple have a 21-month-old son Zachary, born to a surrogate mother.

Ben Summerskill, chief executive of the gay rights group Stonewall, said: ‘Rupert should get out  a little bit more to see the facts  for himself.

‘There is absolutely no evidence that the kids of gay parents suffer in the way they are being brought up or in how they develop.’

In a provocative interview, Everett – who played a gay father opposite Madonna in 2000 comedy  The Next Best Thing – said his mother Sara, 77, wishes he had a wife and children.

‘She has met my boyfriend, but I’d imagine she still wishes I had a wife and kids,’ he said.

‘She thinks children need a father and a mother and I agree with her.