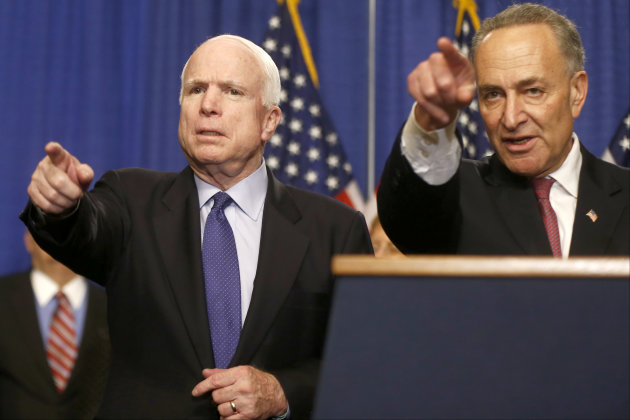 House Republicans will take on the immigration issue in bite-size pieces, shunning pressure to act quickly and rejecting the comprehensive approach embraced in the Senate, a key committee chairman said Thursday.

House Judiciary Committee Chairman Bob Goodlatte, R-Va., declined to commit to finishing immigration legislation this year, as President Barack Obama and a bipartisan group in the Senate want to do. He said bills on an agriculture worker program and workplace enforcement would come first, and he said there’d been no decision on how to deal with legalization or a possible path to citizenship for the estimated 11 million immigrants living here illegally, a centerpiece of a new bipartisan bill in the Senate.

“It is not whether you do it fast or slow, it is that you get it right that’s most important,” Goodlatte said at a press conference to announce the way forward on immigration in the House.

He said that while he hopes to produce a bill this year, “I’m going to be very cautious about setting any kind of arbitrary limits on when this has to be done.”

The approach Goodlatte sketched out was not a surprise, but it was a sign of the obstacles ahead of congressional passage of the kind of far-reaching immigration legislation sought by Obama and introduced last week in the Senate by four Republican and four Democratic lawmakers. Many in the conservative-led House don’t have the appetite for a single, big bill on immigration, especially not one that contains a path to citizenship, still viewed by some as amnesty. Instead they prefer to coalesce around consensus issues like border security, temporary workers and workplace enforcement.