« Hey Unions? Welcome to Politics. Watch That Bloody Nose - Queer Agitator: “”The GOP’s House Faggots Grab Their Ankles On This One.” »

by The Instigator
Categories: Issues: MarxistWatch(TM), News: The Media & The Arts
Tags: No Tags
Comments: No Comments
Published on: June 22, 2012 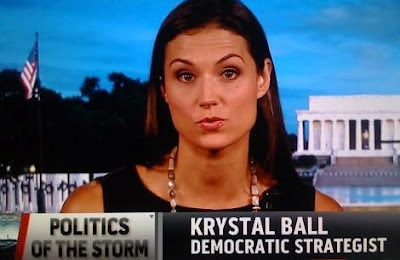 MSNBC host Krystal Ball was in close communication with leaders of an online boycott aimed at advertisers on Rush Limbaugh’s popular radio show, e-mails between the boycott leaders indicate.

Attempting to discover the identity of an infiltrator in their group, the #StopRush leader @Shoq (aka “Shoq Value,” who is believed to be an activist named Matt Edelstein) indicated that Ball had warned another member about the suspected “right wing disrupter.” The other member had “already inquired with Krystal last week, and Krystal said ‘we don’t like or trust this guy,’” Shoq wrote in an e-mail published Thursday by Brooks Bayne at The Trenches.

Bayne said the e-mail was obtained from a Google group, “Social Action Steering,” which was apparently deleted after The Trenches published the correspondence between the #StopRush leaders. The group was attempting to discover the true identity and political leanings of a Texas man, known as “Randy Hahn,” who had joined their anti-Limbaugh effort and caused dissension among the boycotters.

Ball, a Democrat who ran for Congress in Virginia two years ago, is a paid MSNBC contributor who was recently announced as one of four co-hosts of a new daily program, The Cycle, on the left-leaning cable news network. It is unclear whether MSNBC executives were aware of the extent of Ball’s involvement in #StopRush, which used the social network in a campaign to drive Limbaugh off the airwaves by threatening boycotts against advertisers on his conservative talk show, the nation’s most popular syndicated radio program.

UPDATE: In attempting to discover the identity of “Randy Hahn,” the #StopRush boycott leader Shoq sought the services of Democrat consultant Neal Rauhauser, the e-mails obtained by The Trenches show. Rauhauser provided the group with extensive documentation about a Houston man named Jason, whose surname was redacted in the version posted by Bayne. Rauhauser then mused about exposing the man to harassment by sending his personal information to online groups.

“I have been sorely tempted to point him out to various actors — a guy like this, he could really produce some high quality entertainment for 4chan, Something Awful, Encyclopedia Dramatica, etc.,” Rauhauser wrote in his e-mail reply to Shoq.

Rauhauser, who was banned from the progressive blog Daily Kos last year, became notorious in 2010 when he was accused of organizing “a group of E-Thugs meant to harass, threaten, provoke, disparage, intimidate, verbally assault, berate & employ hate-speech against those not in agreement with his brand of politics,” as conservative blogger Patrick Read said at the time.

The so-called “TwitterGate” scandal was largely ignored by major news organizations, but Rauhauser has in the past month gained increasing notoriety as an associate of convicted felon Brett Kimberlin.

UPDATE II: After blogging obsessively about Anthony Weiner’s cybersex scandal last year, Rauhauser became involved with Kimberlin’s 501(c) non-profit Velvet Revolution and, last October, described how he was approached by a member of the “Anonymous” computer hacking conspiracy and solicited their assistance in targeting his and Kimberlin’s enemies.

Rauhauser was one of three people — along with Kimberlin and former Raw Story editor Ron Brynaert — whom blogger Patrick “Patterico” Frey named last month as suspected of complicity in a July 2011 “SWATting” incident at his Los Angeles home. Sen. Saxby Chambliss and 85 Republican members of Congress have called on Attorney General Eric Holder to investigate the reported harassment of conservative commentators.

If Shoq’s claims are accurate, the latest reports may suggest multiple connections between the Limbaugh boycott, MSNBC, the Obama campaign, Democrat operatives like Rauhauser, and tax-exempt groups like Media Matters and Kimberlin’s Velvet Revolution.

« Hey Unions? Welcome to Politics. Watch That Bloody Nose - Queer Agitator: “”The GOP’s House Faggots Grab Their Ankles On This One.” »
Crush Marxism!