German Paper: “Is Obama A Communist?” 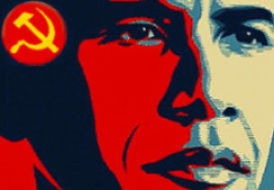 Stanley Kurtz provided an invaluable service during the ’08 election cycle by researching Obama’s background, his ties to ACORN, work with Bill Ayers on The Annenberg Project, and Woods Fund,  and his ties to the Socialist “New Party”. He’s making headlines again by proving in NRO once and for all that Obama was in fact, a member of the Socialist New Party in the 1990s: Obama’s Third-Party History:

In late October 2008, when I wrote here at National Review Online that Obama had been a member of the New Party, his campaign sharply denied it, calling my claim a “crackpot smear.” Fight the Smears, an official Obama-campaign website, staunchly maintained that “Barack has been a member of only one political party, the Democratic Party.” I rebutted this, but the debate was never taken up by the mainstream press.

Recently obtained evidence from the updated records of Illinois ACORN at the Wisconsin Historical Society now definitively establishes that Obama was a member of the New Party. He also signed a “contract” promising to publicly support and associate himself with the New Party while in office.

Hit the link to view Kurtz’s ample evidence. The MSM, who ran cover for Obama on this issue (among others) in 2008 are certain to be expressing mea culpas in the coming days. (Just kidding.)

This news has not only made the rounds in the conservative media here in the United States, but is making news overseas in a German paper; Kopp Online: Ist Obama ein Kommunist?

Here is a rough translation of what is being reported about Dear Leader overseas:

But the fact (is ) that Obama has many connections to people who are involved in the international communist movement. The question that we do not dare to ask is, of course, why Obama concealing his ideological beliefs. Many will reply that it was surely only a coincidence that he has just started on the birthday of Karl Marx his campaign. Many will reply that ignorance is the reason that Obama has a Marxist activists (Van Jones) has been appointed as his Special Representative for the Green Jobs Initiative. And many claim to be, it did not matter that Obama’s former mentor Frank Marshall Davis, a member of the Communist Party.

As the journalist Stanley Kurtz Obama looked past as a “community organizer” he began by the question: “What in the world makes such a> community organizer, ‘” The answer to this question gives us Kurtz, in his book Radical-In -Chief: Barack Obama: The Untold Story of American Socialism. According to Kurtz were “Barack Obama’s colleagues and mentors to the most sophisticated and influential crypto-communist> Community organizer ‘of the country. Their strategies for political transformation and the social changes shape the Obama administration to date. “

Kurtz was initially not Obama a communist, but now he revised this misjudgment. “During the election campaign of 2008 I did not hesitate to call Obama a radical,” Kurtz said in an interview. “But not even I would have thought at that time that he literally is a Communist. . When I examined his past, I discovered a clear communist activities, I discovered a phase in his life where he was literally a classic Marxist-Leninist “When asked why the press Obama’s Marxist background have not been revealed, said Kurtz,” There have been no real efforts to verify Obama during the presidential campaign. Such material, which came to light at that time was completely ignored by the mainstream press, and indeed deliberately and systematically. “

When Obama was in 1983, a Marxist-Leninist, why he became a member of the Democratic Party and liberalized so that his views? That was just a matter of tactics, said Kurtz. In the ’80s saw Obama and his communist comrades, that it would not succeed to trigger a communist revolution in the United States, so they changed their tactics. Kurtz explained this change as follows: “Their idea was to get a sort of de facto control over the economy from the bottom up – not by a nationalization decreed from above, but by working at the local level through ‘community organizing’” .

What Kurtz is saying is true, exactly. In 1983 I was invited to attend a meeting organized by the Communists in the academic lecture hall on the campus of the University of California at Irvine. On the tables in the lobby of the Communist Party literature was available and there was a rousing speech. Oddly enough, the talk dealt more of strategy than of anything else. The speaker, a visiting professor, said that the Americans were blinded by the “American dream”, they would not vote for socialism – not yet, at least for now.

What must come, he said, would be another Great Depression. It would need to awaken the spirit of socialism in America. In preparation for the inevitable economic crisis to undermine the Communists, the Democratic Party would be on their left wing. Your ultimate goal here is to choose a crypto-communist president.

Of course it sounded in 1983 simply crazy. But now it sounds like something that could have been done. As for the Democratic Party, this was actually infiltrated by communists. At a town meeting earlier this year, Congressman Allen West was asked how high “percentage of genuine Marxists was” among the members of Congress? West said this was a valid question, and figured among the Democrats, there would be about 78-81 Communists. “They call this the Congressional Progressive Caucus,” he said.

Deputy Allen West has lost his mind? No, sadly, his view is very realistic. The New Zealand politician Trevor Loudon held in March, a lecture on the history of communist infiltration. According to Loudon the central secret of the success of communism is to enforce the ability of a small Marxist-Leninist Party, its politics as “the law”. In America, this means that to gain control of the Democratic Party. “They like the” hold for far-fetched, Loudon said, but that’s not it. And he listed a number of examples of successful Communist activities within the political system. How about naming the campaign, a national holiday after Cesar Chavez socialist trade unionists, which was supported by President Obama. This campaign was led by Evelina Alarcon, who is, according to Loudon, the chairman of the Communist Party of the United States in the district of Southern California.

The author, Jeff Nyquist is a conservative American journalist who writes for Financial Sense.

His bio as provided by Kopp Online:

Jeff Nyquist is a renowned expert on the Soviet long-term strategy and commented on for many years, the world’s political events in light of the continuing Communist threat. He runs the website www.strategiccrisis.com that educates about the strategic interaction between the world powers and shows that Russia and China to work in a way against the West, which is not understood by the Western elites.

The reason I know about this is he linked to my post, Video: Trevor Loudon Explains Communist Infiltration In The United States in his piece.

Shop And Support Us!
Take Notice!